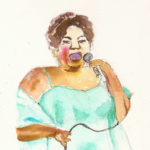 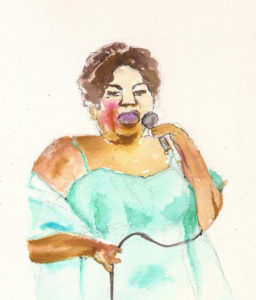 Well into my thirties, the only thing I really wanted to dance to was Motown, and Aretha was always a part of that. In my late twenties, I moved to Portugal for my first real teaching job. Unfortunately I got stationed in Porto, not Lisbon, and Porto was not a very happening town in 1982. My roommates and I decided to do our best to make it so. We got a house outside Porto in a somewhat rural area called Miramar. We taught night classes, and our adult students were one source of our paltry social life. A big thing in the fall in Portugal in was the “magusto,” a party where roasted chestnuts and vinho verde (Portuguese green wine) were served around a bonfire. . We bought a bunch of green wine and chestnuts and invited our crazy teacher friends from Lisbon to our magusto. We also invited our students and told them to spread the word. The day arrived and the event exceeded our expectations; this was the party to end all parties. Hoards of people, green wine, roasted chestnuts. Oh, and Motown. Lots of Motown. LOTS of Aretha. Singing along to Aretha, “ Freedom, freedom, freedom, freedom….” and “Re, re, re, re, re, re, re, respect, just a little bit, just a little bit.” Later I found out that one of the young Portuguese partygoers asked one of our teacher friends what “re re re re re” meant. As the party wore on, we noticed that some of our young guests had trouble holding their liquor and a fair amount of vomiting ensued.. We deduced that the entire underage population of Miramar had shown up, and we had just unwittingly hosted a giant teenaged drinking bash. This was the beginning of my year in Portugal.

← A Week With Lynda BarryClimbing the Pyramid with Michael and Muhammad →