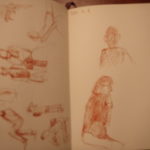 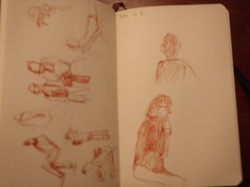 It’s been challenging to draw here. It’s winter, so it’s cold outside, and the apartment I’m staying in is an 1860s Haussmann building, including the lighting, so it’s kind of dim in here. On Thursday, I gathered all of my strength to stand in line for one hour to get into the D’Orsay. By the time I got in, I was starving and dehydrated, and then I had to stand in line for another half hour to get into the café just to get a sandwich and some water. It was crowded, but worth it, though I long for the days when I was able to come here and have these museums almost all to myself. Things got better. Yesterday (Friday), I went to the Victor Hugo Museum, which was fortuitous, because it fit perfectly with the Intuitive Drawing Workshop that I went to in the evening. Apparently Victor Hugo and his cohorts were into Ouija boards and channeling spirits through their art. The Intuitive Drawing people are getting together to draw in the Louvre tomorrow (Sunday. Not just any Sunday—Free Sunday) to draw. I expressed hesitation about going to the Louvre as I was still suffering from PTSD from the D’Orsay, but I used L’Orangerie as a test case today, and as it went well, I will go to the Louvre tomorrow. I got into L’Orangerie easily, and it was relatively peaceful in there. L’Orangerie houses, among other things, some very large mural like Monet water lilies, and the museum people like to keep it as a meditative space, so when people talk too loudly, the guards Shhh them. It’s great. France is changing, but the guards can still Shhh people in a frigging museum. I love it. That could never happen in the USA. The Intuitive Drawing people had encouraged me to sketch in spite of all of my difficulties, so I did a few sketches in the Tuileries in spite of extremely chilly conditions. (This was right before L’Orangerie.) While meditating on the Water Lilies, I got into a conversation with a French couple in L’Orangerie about the sketchbook. I wasn’t even sketching. I was just writing something and the sketchbook was open, so the French couple started talking to me. In French. And I did OK. If you want to meet people, here, I recommend breaking out a sketchbook. Unfortunately, I only sketch when I feel like sketching, so I can’t really use it as a social networking tool, but as a nice side effect, it works every time.